Proper ventilation - through permeable materials - allows for a better quality of indoor air which is vital for good respiratory health – as it allows a healthy amount of air to circulate. Vapour-permeable insulators help any moisture to escape whereas trapping it would otherwise lead to a build-up of condensation and increased risk of mould.

Much of the existing research into insulation uses computer model systems to predict how the materials may perform over a period of time. However, these aren’t based on real-world performance. They do not consider varying weather conditions or other influential, external factors that are crucial for producing accurate performance data.

Computer models’ predictions are fundamentally limited as they often make inaccurate assumptions such as:

In 2011, we began research into how Lime Green insulation materials performed over time in a two-bed, 1820s, Victorian home.

Working with ArchiMetrics and the Society for the Protection of Ancient Buildings, we installed four sensors into an external-facing wall within the house which would log humidity and saturation data every five minutes over the six-year period. As real-world data didn’t yet exist for insulation performance, Historic England also part-funded the project.

Prior to insulation, the wall consisted of a solid brick wall internally coated with a 12mm parge coating (Lime Green Duro ) – a breathable render/plaster based on recycled aggregates and hydrated lime.  This retained breathability while preventing drafts through the brickwork.

Many typical upgrades simply consist of plasterboard fixed onto foam insulation which is then installed onto the internal face of a solid brick wall.

The computer model predicts there will be no condensation in this wall as it assumes a static climate (no weather variations) and no gaps between the materials. In practice, there will be small gaps where water vapour can enter the wall’s fabric and, because the materials are impermeable, it will be difficult for this moisture to escape. 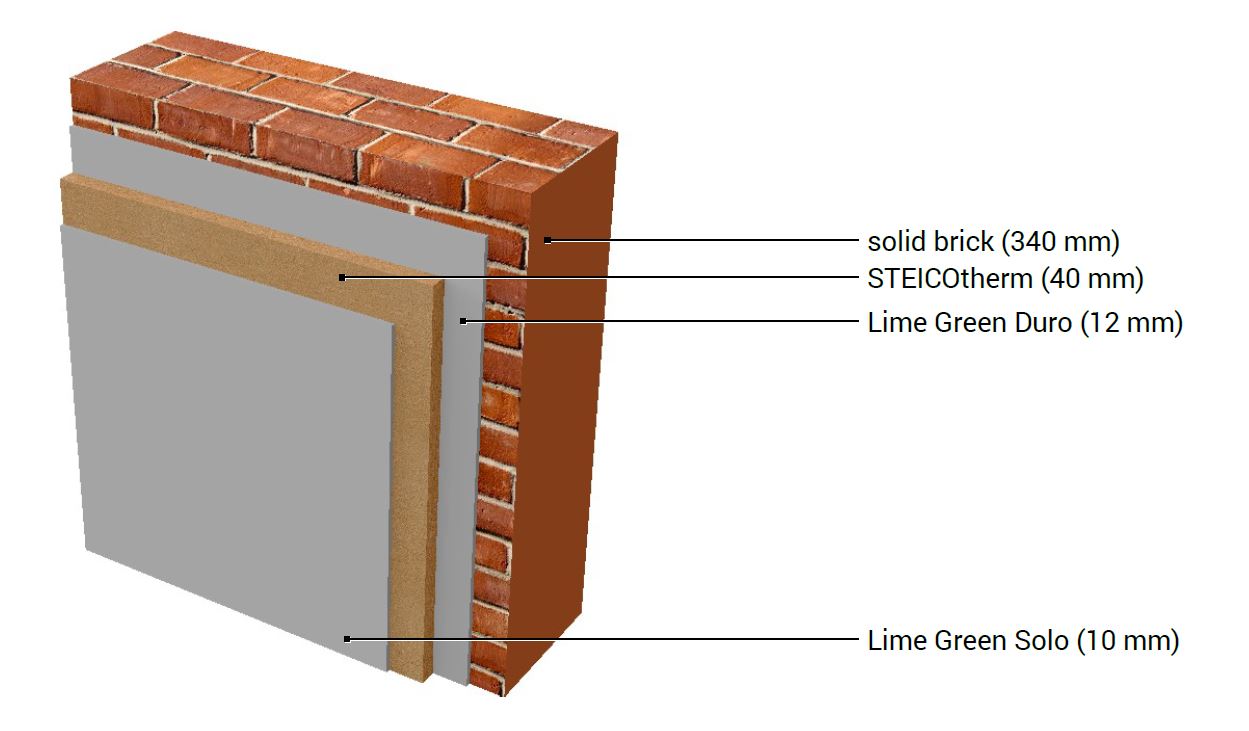 To insulate the wall within the study, we installed a 40mm woodfibre board onto the existing parge coat. This was then plastered with 10mm of highly-vapour permeable, lime plaster – Lime Green Solo. Finally, we coated the wall with a mineral paint to help retain breathability.

During installation, we placed a fourth and final sensor beneath the internal Solo plaster at its interface with the woodfibre board (S1).

The computer model predicted a significant amount of water would condense between the woodfibre board and parge coating, due to the material’s permeability.

The following data reflects the wall’s performance over the most recent period (Nov 2017 - Jan 2019).

Between the woodfibre board and the internal plaster, the saturation margin is high – suggesting a large decrease in temperature would be needed for condensation to occur.

This is expected as the sensor is closest to the warmer, drier, internal face of the wall.

S1 is also often influenced by the internal temperature of the home, buffering excess humidity before later releasing it.

No condensation occurred beneath the woodfibre board (on top of the parge coat) or near to the internal face of the brickwork.

This finding was crucial as the computer model predicted condensation would occur here.

Saturation margins for S2 and S3 were relatively stable throughout the data, indicating a lag time – ie if there was a build-up of moisture in these areas, it would take longer to escape.

There was moisture present at S4 across a number of periods in the data – particularly through winter months. This moisture is from driving rain, demonstrating the permeability of the brickwork. However, as this area is so close to the external face of the brick wall, it also dries out rapidly.

Sharp temperature increases at S4 occur when the wall is in direct sunlight – showing temperature variations from the external air temperature. In these conditions, vapour will flow from the outside to the inside (rather than the inside, out). Relative humidity is the amount of water/moisture present as a percentage of how much the air can hold before it becomes saturated.

Risk of mould increases at around 80% relative humidity. A temperature increase would reduce relative humidity levels, despite the absolute quantity of moisture within the fibres remaining the same.

Relative humidity at S1 was often lower than that of the internal environment. The lime plaster acts to slow rapid internal air changes ie from cooking or showering.

S2 and S3 were stable throughout the data as they are farthest from both the external and internal environments, meaning any movement of moisture would be slow and incremental.

S4 varied the most over the period as it is largely influenced by external weather conditions. Relative humidity levels of 100% were recorded after driving rain penetrated the fabric of the wall.

The Importance Of Breathability

This is the first set of data that demonstrates how insulation performs under pressure from real-world variants.

Previous research looked at the movement of vapour, but ignored the importance of liquid water.

This study looks to first principles, asking ‘How does this wall work? What is it doing?’ – a fundamentally different approach.

Over the six-year period, the wall steadily dried out with no condensation observed.

The Alliance for Sustainable Building Products (ASBP) says, ‘breathability is the most effective way of maintaining stable and harmless moisture levels within the building fabric[i].’

For more information about the benefits of breathability or the products used within this study, visit Lime Green's product range or get in touch today.