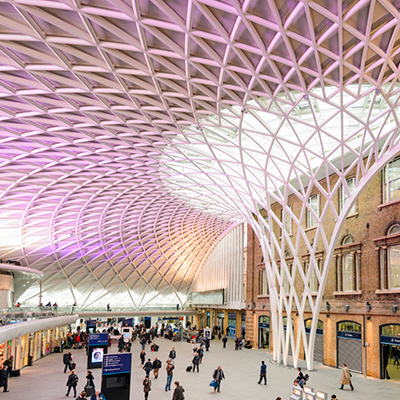 London's King's Cross Station is undergoing extensive development and regeneration. But as a landmark location, special care must be taken to preserve the area's historic character and nature.

The organisation responsible for doing this is English Heritage. In particular, they are keen to retain the ‘natural' look of London's King's Cross Station, meaning that the renovation of existing buildings has to be undertaken sympathetically and in keeping.

The Requirement
So when it came to the repair of brickwork and high-level decorative cornices damaged during the Second World War and left untouched since, they set out a very detailed specification for their reinstatement.

This meant ensuring that, particularly when it came to lime mortar, the colour should remain consistent throughout, so as not to give a patchwork appearance to hundreds of square metres of wall.

The Problem
However, there were a number of fundamental problems in achieving this:

The Solution
Lime Green was asked if it could meet those requirements. After numerous site visits, and much research and experimentation that saw us carefully mixing and remixing the constituent materials, we had a nine-ingredient lime mortar that was the perfect colour match for the one already in place.
With English Heritage and their architects satisfied, and our prompt-based Roman stucco render also chosen for the cornices, work began.
To ensure consistency of the product was maintained throughout the process, the lime mortar was carefully mixed. Checks were then made on each lime mortar batch, before being sent to site 10 tonnes at a time.

The Benefits
Besides being of high-quality, our specialist Lime Green products also had other advantages.

Our products were the only ones that ticked all the boxes, not just for English Heritage, but also for their teams of advisers and their contractors, who found working with our lime mortar and Roman Stucco plaster quicker, easier and more enjoyable than using standard site mixed mortars and plasters.

English Heritage were so pleased with our lime mortar at London's King's Cross Station, that having discovered it, they have specified it again for other projects elsewhere.