Houlston Manor is an unlisted mainly 17th century box framed farmhouse, which has been substantially added to and altered since it was first built. Originally a single storey building, the building has expanded over the years to include a second storey, double depth bays and a substantial chimney stack. The house was also ‘gentrified’ according to the fashion of the early 19th century when the timber-framed front wall was replaced with brick to create a unified exterior.

Owned by the same family for generations, the current owner was born in the house in the mid 1950s and has lived there ever since. His long family connection with Houlston reaches back to his paternal grandmother, whose uncle was a tenant of the Manor in the mid 19th century – they even have a very early photograph of him sitting in front of the house!

While the basic structure of the house was in good condition, including the roofs (which had been stripped and re-slated in the recent past), the windows were in a worsening state of disrepair. In addition, the southern gable end had been letting in wind driven rain through failed pointing and, despite having central heating (installed in the 1990s) and insulating the attic spaces, the house was not a warm one.

The owner’s aims were threefold: to replace the rotten and draughty windows with new; to insulate the walls, and, finally; to improve the aesthetic appearance of the house by reintroducing the 19th Century symmetry. Lime Green's Warmshell insulation system is able to bring an old building constructed of traditional materials up to modern energy efficiency standards, and to do so sustainably. 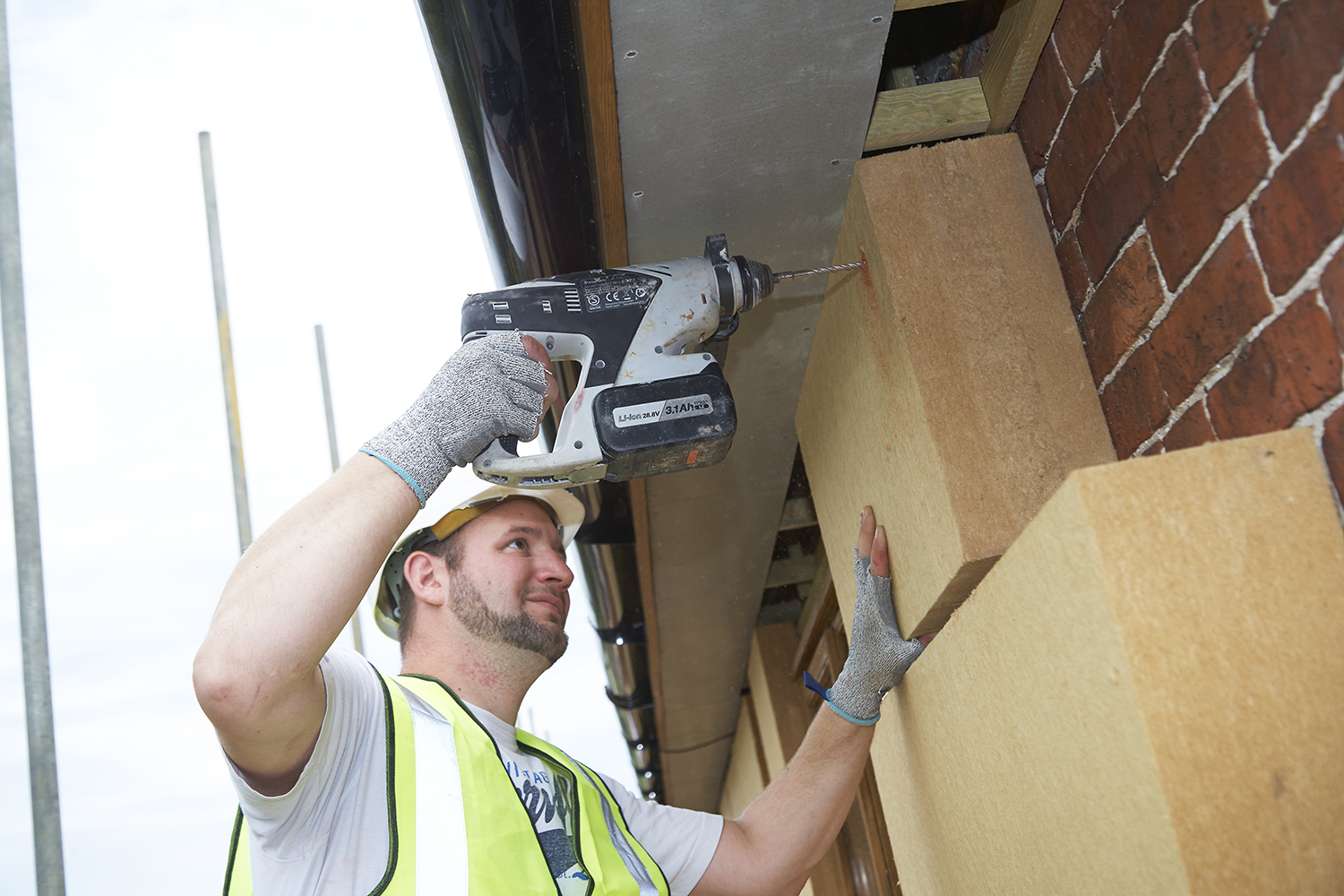 After choosing timber casement windows to replace the rotten sashes, a number of wall insulation solutions were considered. The owner decided that external wall insulation would help resolve the aesthetics issue and deal with both the threat of failing pointing and general poor weather-proofing of the building. Houlston Manor is of solid-walled construction and without a damp-proof course - the risk of moisture condensation within the walls was considered to be of paramount importance. The use of breathable materials, which would allow vapour transfer through the insulating layer, was essential and the Lime Green Warmshell insulation system, which uses wood fibre board as the insulation layer and lime render as a weather-proofer, was judged to fit the bill.

When insulating externally, the thicker the insulating layer, the warmer the house will be. The cost of fixing the woodfibre insulation boards and applying the lime render is the same no matter how thick the boards and so the owner chose a board thickness of 160 mm as a suitable compromise between cost and benefit.

For the Warmshell insulation system at Houlston Manor, wood-fibre insulation boards were fixed directly to the brickwork externally after excavating down around the sides of the house at ground level to ensure that there were no cold areas at the internal floor level – a precaution taken as the house had different floor levels internally.  The house eaves were also  extended to ensure that the roof had significant overhang over the woodfibre insulation board and lime render.

The wood-fibre insulation boards were then covered by two coats of lime render – a basecoat (with reinforcing fibreglass mesh) and decorative finishing coat. Houlston Manor is now secure, warm and weather-proof for decades to come. In the first three months following the Warmshell installation (October-December 2015) the property used 2800kWh for heating, compared to 6821 kWh in the exact same period the previous year. This represents an incredible 59% reduction in energy costs! As the original brick walls dry out and warm up over time, the owners expect to see even greater energy cost savings.

The owner’s family have changed and improved the aesthetic appearance of the house – far from the first time this has happened in its history – but, importantly, the Manor is now ‘fit for purpose’ for the 21st century and beyond, a warm and cosy family home that will last for many more generations to come.

To find out more about Lime Green Warmshell Wall Insulation, visit: https://www.lime-green.co.uk/warmshell Alternatively, please give us a call on 01952 728611 or fill in our enquiry form.